It's amazing to see how many Houston fans still can't see McHale's weaknesses as a coach from the heartbreaking losses against Dallas and Lakers. More and more ClutchFans.net members are calling for his firing after blowing a 14pt lead against Dallas and rightfully questioned if he is the right coach that can help Houston to win the ring.

McHale's deficiency as a coach is to play players based on pure energy and sparks without any brilliant strategy and adjustment which are of the utmost importance to win 7-game series in the playoff. (Houston was ranked 23rd out of 30 teams to win close games in 2012-2013 season at 42%).

The Dallas game exposed his main weakness as a coach in once again not being able to make an adjustment when Dallas made a run. Houston had a 14 pt-lead at the end of the 3rd quarter but they let Dallas trample all over them with 36-19 run in the 4th quarter? What adjustment did he make to prevent it? Did he know that the starters were tired as Dwight indicated in the Chron article ("Dwight Howard: Rockets need to know when to take a breather") but 'trusted' them to deliver in the 2nd of back-to-back game?

1. Short rotation in the 2nd of back-to-back games
Starters played long minutes (Harden 43 min and others ~36min). If he panicked and simply went back to the starters who were unable to stop Ellis and Dirk, it wasn't much a strategy to slow down Dallas and be aggressive on offense. What about trying to use Ronnie Brewer, the defensive specialist, to slow down Monta Ellis who's been killing them all game long? What about trusting the small lineup (Harden, Lin, Bev) who has the biggest net rating so far? Run some set plays to break zone defense?

2. No trust in PG to facilitate playmaking, just scoring
McHale simply couldn't recognize Lin's contribution in getting assists and hockey assists to give Casspi, Bev and Asik easy scores because he thought Lin was a liability in not being able to score. It's such as a contrast with Rick Carlisle who kept playing Calderon for 25 min in the first game who despite scoring 0 points still produced with 6 assists.

3. Sticky ball, Streaky 3s and ISOs won't win championships
Even if he decided Lin couldn't help in this game, what did McHale do to tell his team to be aggressive like in Q1 to attack Dallas in Q4? Harden's ISOs and Dwight's layup stopped working. Consecutive 3s by Bev and Harden were fools' gold since the ball movement just died.

McHale is simply not the right coach to win championships. McHale played "energy and sparks" basketball but Carlisle came to play chess-smart basketball. That's why Rick Carlisle has a ring as a coach and McHale doesn't. Checkmate! 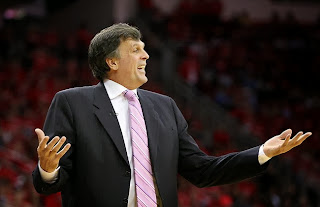