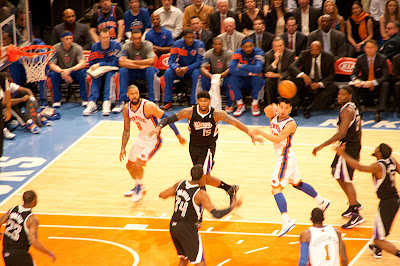 Really? Was Jeremy Lin the Most Impactful Player for NY Knicks during 2011-2012 Regular Season when he played for 35 games and not sidelined with injury? Yes, but it's not my opinion. NBA.com +/- Stat says so.


The debate is still ongoing in the twitter world and among NBA writers/fans.

Some said it was just a big hype and it was really the NY Knicks defense anchored by DPOY Tyson Chandler that led to the Linning streak?  Or did Jeremy Lin actually inspire the Knicks to play better team offense and defense?

Which player made the most overall impact for the Knicks in defense and offense whenever he stepped on the floor?

I decided to use NBA.com +/- stats to find the answer.
For those who are not familiar with this stats, this is the +/- wikianswer definition:
"The +/- stat is tied to team performance during the time that that particular player is on the court. The games official scorer records the differential in terms of gain (plus) or loss (minus). "

Throughout the season, this +/- stat is perfect to measure the overall impact of a player on the court because a high +/- number will give the team more chances to win the game. Simply said, we want players who can not only score but defend well (individually or as a team) to prevent the other team from scoring.

Landry Fields is surprisingly ranked  #1 with 213 +/- in 66 games even with his poor shooting last season. Perhaps Toronto Raptors is not totally crazy paying him  $20M for 3 seasons. He can only get better, right? Steve Novak is ranked #2 with 178 in only 54 games (12 fewer than Landry).

Well,  there is a small problem with this ranking because some players played more games than the others so the ranking might favor those who played more games like Landry. So we need to divide it by the number of games in order to get the average +/- per game. This will allow us to compare the +/-impact of a player in a game. Also, we need to remove players who played fewer than 25 games (J.Jordan, R.Balkman, D.Gadzuric) because these backup players most likely played in garbage time (the last 5 minutes when one team is winning by 15-20 points) and the other team players did not play as hard. We want to see which players made the most contribution when the game still matters.

So who ranked the best at Average +/- per game for the Knicks in 2011-2012 regular season? Who made the most impact in the game everytime they stepped on the floor?

It means that whenever he stepped on the court in a game, he either used his scoring skills and defensive prowess to outscore the opponent by 4 points OR he magically transformed his teammates to do the work for him.

And you wonder how come Melo is only ranked #7 at 1.96? After all he was the top scorer for the Knicks. Well, he either expended a lot of energy to score a bunch and was too tired to play defense OR he magically transformed his teammates to play bad defense. I prefer to think the former although you can feel free to choose the latter.

I dare not speculate why Stoudemire was last at -0.94.

So there it is, folks!  Whenever people ask you if Jeremy Lin is overrated or just a big hype, just point to this +/- statistics that NBA.com has generously provided for all of us.  Whether Jeremy Lin used magic or skills to inspire NY Knicks to outscore the opponents by 4 points every game, he did make the Knicks play better team offense and team defense.

On a more important question: Does it mean Jeremy Lin will be the best player in Houston Rockets 2012-2013? It is very likely if he follows the same +/- pattern but he definitely needs to prove that he can play more than 35 games to silence many doubters.