How to Fix Harden-Lin (Lost) Connection

How do we know it's true? In this short analysis, I will show that these general observations from many fans watching the game are validated by the statistics of lower 3PT%, worse +/- and Lin's lower usage rate (USG%) 3PT% in Game 3-8 which also pointed to the lack of ball movement expressed by Houston coaches. Houston coaches would need to right the ship by insisting Jeremy Lin to be the primary playmaker and let Harden be the best scorer.

After starting 2-0, Harden and Lin were speculated to be the best backcourt duo in the NBA.
But not so fast because they crashed back to earth with 4 losses and 2 wins in the next 6 games 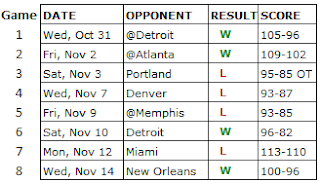 Worsening Team +/- Stats in the last 2 min of regulation
Even in their last 2 wins, their +/- stat in the last 2 min of the regulation showed that they were outscored by their opponents unlike the first two games when they finished stronger by outscoring the opponents.  Houston is a young team who didn't know how to close out games yet but the evidence (albeit small) said they managed to do it in Game 1 and Game 2. Most knowledgeable Houston fans know that the individual iso plays in the last few games simply did not work. 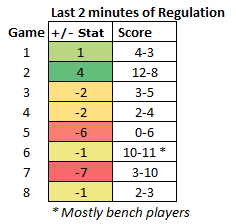 The individual +/- Stat for Lin and Harden also shows similar but worse trend for Lin after Game1-2. 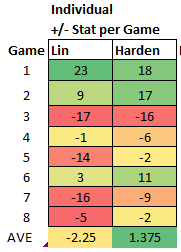 Why? They couldn't finish strong because Lin deferred to Harden to be the primary playmaker.
Harden is a great playmaker but he only got to play with his teammates for over 2 weeks and he can't do it all by himself. If this continues, he will overexert himself on the offense and unable to help much on defense. Meanwhile, Lin will be unable to distribute the ball effectively  on offense. The whole thing will snowball.

If you are still unconvinced, check also the decreasing trend of # of assists from Lin to Harden from Game 3-8: 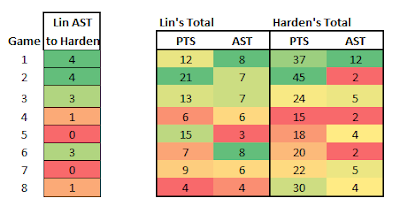 Harden simply had to work harder for his points and the results were worse than Game 1 and Game 2. Even if Game 1 and 2's opponents were weaker team, the downward trend is very alarming.

Fans who watched the games can tell that Harden seemed to play the Point Guard role and
Lin just seemed content to let Harden be the primary playmaker and assumed the role of standing in the corner as a spot-up 3-PT shooter, which is never his strength. As a result, their 3PT% plunged from 43% and 40% to atrocious 17% and 21%.

But defenses double-teamed Harden in Game 3-8  so he can no longer score 37 points and 45 points like he did in the first game. Lin's performance suffered because he penetrated less and his FG attempts dropped because he did not seem confident  to shoot and being a still-standing 3PT shooters in the corner.

Usage rate tells us the number of possessions a player utilizes while on the court. This statistic is a good indicator of how big of a role a particular player has in the team's offense. 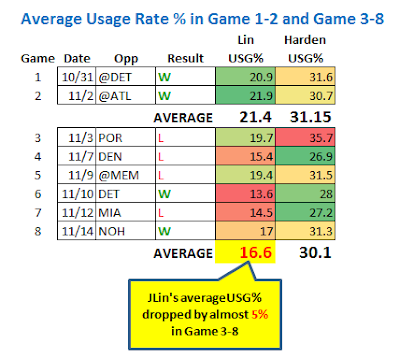 You might be curious on what their USG% in 2011-2012 season when they played for NY Knicks and OKC Thunder.

For Lin, it was significant drop-off by 50% from 31% to 16% in Houston. Yes, it's a different system for Lin where it was point-guard heavy in NY Knicks under Coach D'Antoni but later on Coach Woodson also took over without much change in 31% USG% so Lin was always involved for both NY coaches.

Harden was the 6th man in OKC Thunder so he deferred to Durant and Westbrookto only have almost 20 USG%. Now he is a starter so he certainly should increase his USG% but Houston coaches need to ensure that Lin will be the primary playmaker as evident in Game 1-2.

This would explain why Jeremy touched the ball less on all possessions and seemed to lose confidence in shooting rhythm. He is not a 3PT specialist like Steve Novak who excels in catch-and-shoot. He needs the ball in his hands in most possessions to leverage his strength to penetrate and break down the defenses or bring it back out if defense collapses on him. I will provide some examples in the next posting to illustrate this point.

I understand Jeremy Lin is still recovering from his knee surgery and haven't regained 100% of the explosiveness but he demonstrated he can be the primary ball handler in Game 1 and Game 2 to leverage Harden's strength. So why changed the winning formula? Why made both Harden's and Lin's performance suffered in Game 3-8 by making Harden the primary ball distributor?
Harden seemed to score 40 points with effortless shooting in the first 2 games, but now he had to assume the most PG role with increased attention from defense while Jeremy is stuck on the corner.

In summary, the key message to Houston coaches is loud and clear:
Allow Jeremy Lin to be the primary playmaker and ball distributor to facilitate ball movement. He is the Point Guard after all. He will leverage Harden's strength as top scorer and secondary playmaker as proven in Game 1 and Game 2. And monitor the Lin's Usage Rate % to be at least 22%  (similar to Dragic and Lowry in McHale system) to support their desire for more ball movement.